How to tell you have a dishonest or unprofessional broker?

on May 22, 2019
I've had these email conversations with a client recently. He is using our Auto Recovery EA and told us that the expert advisor opened 2 hedging trades instead of one, as it is supposed to do. This is a singular case and at first I've blamed the use of a VPS. Obviously, if the EA is running on 2 machines (ie personal PC and VPS), they might both trade the same time. This might still be the case, as far as we know.
Anyway, I've explained already to him how the EA works, but I believe I haven't done a very good job. So this is what I think it happens (again, assuming there is a single instance of his EA running), step-by-step, hopeful more traders will read and understand:

I repeat: as long as there is a second pending order, opposite than the first one, with a higher lotsize (depending on the EA's settings), the EA won't do anything else. Its job is done. It's a simple IT THIS >> THAN THAT line of code.

Now, this is what I think it happens right after the EA sends one pending order to the broker's server: the broker simply delays its execution. I have no idea how/why this is done. But it is the only thing I can think of. Basically:

THIS SHOULD NOT HAPPEN

Not with an honest reliable broker, at least.

If you have similar issues with other EAs, from other providers, I strongly advice you to change your broker. I cannot really point to the best broker, after all none of them are 100% good - think that they want your money, after all. But you can always try on demo, then trade small lotsize to check whether the broker behaves normally.
best broker broker dishonest brokers worst broker 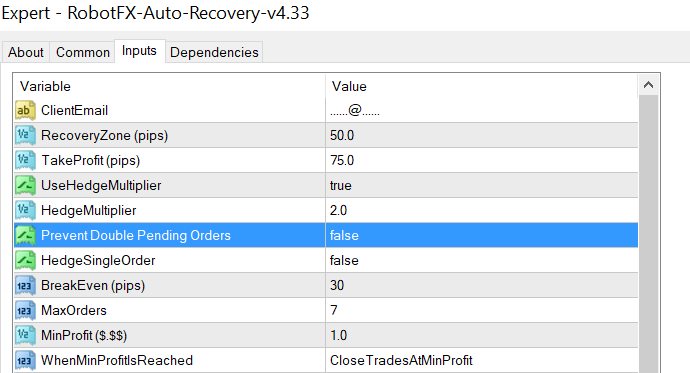 All our hedging expert advisors, including the /complex EA, have been updated to prevent placing of pending orders. Be advised that you should not need this option below set to true, and if that happens it is something wrong on your side or the broker's server. Short story : the Prevent Double Pending Orders works by deleting (if that's the case) the pending orders whenever their more than one, as it should be when using the zone recovery hedging option. So every time there are more than 1 pending hedging order placed, the EA deletes them and places the pending order again on the next tick. Long story : we have introduced this update while trying to identify (and fix) a bug report from one of our traders, who informed us that the EA is placing 2 pending orders instead of one. Since our EAs logic is to place the pending order only if there is no other already on the chart , we have concluded that it must be a broker server issue, and the only way to avoid this would be to reco

Just another reminder that our support is only for (better) explaining how our EAs works, their settings and any possible bugs found while using our EAs. We do not provide support for trading lessons, we do not offer any magical all-winning .set files for our tools and we definitely do not teach wanna be traders how to set a stoploss . Sorry to  disappoint anyone wanting to start their trading adventure, but you must know how to trade before purchasing and using our EAs. Thank you for understanding.

Sure, opening/closing trades at certain price levels can be profitable, but then.... I thought about closing the trade at first price level, then changed my mind. And at the second level, luckily changed my mind again. Finally I decided to let the expert advisor manage it and stop interfering with it. In the end, good choice letting the Fluid EA do its job